(It is hard to whistle and eat at the same time.)

Ireland in the 1930s was a very different place from its current state, and from the Hutt Valleys in 2021. Yet 90 years ago three long-time members and stalwarts of the HVIS were born in that “Oh so different” time and place.

John Brophy, Dora Murphy, and John Desmond have, for longer than many of us can remember, been synonymous with “The Club”. We have admired the tireless work of Dora (fund-raising, in the kitchen), the crystal-clear tones of John Brophy in song, and the tales tall and (usually) true of Johnny. 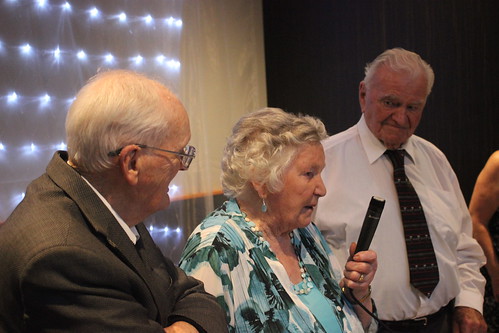 So it was entirely appropriate that we marked their respective milestones with a family gathering for their extended whanau at the Club recently.

An afternoon tea for the 3 and their wider families saw the Club filled, fine food enjoyed, songs sung, performances of dancing and poetry reciting, both performed by some of our youngsters, and some lovely tunes performed by Adam Coster & Pat Higgins. Lá Breithe Sona daoibh! We’re hoping you give us an excuse to gather again in ten years time!

Which brings to mind another wee gem: I have heard a bit of talk recently that HVIS itself turns 60 this year, and that we should mark the milestone in some way, probably at Labour Weekend. If you’re able/willing to help in some capacity, please get in touch with Lynn O’Toole by email or on 027 6529 169 asap.

This year the Wellington/Hutt Valley GAA Club are celebrating 130 years (at least) of Gaelic Games being played in Wellington and the Hutt Valley.

Over the years, members of the various Irish Societies and the club have worked together to make the games a success. On June 12th, they are hosting a set of games at Awakāirangi Park in Upper Hutt followed by a get-together at the Hutt Irish Society. What better excuse could there be for getting out & celebrating that piece of history?

GFHA ARE LOOKING FOR MEMORIES & STORIES

They tell me that they would love to gather stories and memories that you may have of playing Gaelic Games in Wellington and the Hutt Valley over the years.

Whether it’s a small anecdote or memories of people long gone they’d love the opportunity to catalogue them to share with current and future players.

So why not a take a minute or two to share your memories in a quick survey.

Although we had a small crowd, the quality was HIGH, and, given the numbers present, the monies raised for our roof-repair fund were EXCELLENT. 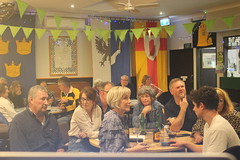 Another HVIS QUIZ NIGHT last month was another for the annals of enjoyable and challenging events at HVIS. In the spirit of even-handedness, I managed to befuddle and bamboozle both the Irish and the Kiwis who were present.

You can have a go for yourself with Round 3 – Flags of the World. See how you get on!

I hope you’ve been in touch with Mia Scrimgeour and got yourself involved in her Golf Tournament on Friday 7 May. No? Do it NOW at https://golfforacause.rsvpify.com.

This month’s Book Club selection is Where The Crawdads Sing by Delia Owens. They’re next meeting is on Thursday 13 May at 7.30. If you’re interested in joining the group, or maybe starting your own, email Desiree or call her on 021 727 835.

The next regular Thursday Film Club slot is Thursday 27 May. After the “light fare” of recent screenings, we’re going a little more serious this month.

As this year is the 40th anniversary of his death, we’ll be looking at Bobby Sands: 66 Days, an outstanding documentary much of which is comprised of Sands' own words, drawn from his hunger strike diary, a unique insight into the man and his beliefs. We’ll start about 7.30pm, and the Bar will be open. All welcome, and there is no cover/door charge.

THE STORY OF THOSE MAPS 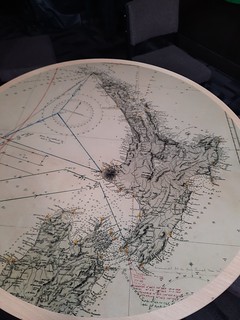 Those who have taken the time to cast their eyes over the new maps on 4 of our tables will have noticed the maps have been annotated. There is a story associated with them.

Firstly, the original map was published in 1885, so you will find quite a few changes from today’s maps – place-names, and even specific towns or locations may have ‘moved’ or appeared or disappeared.

But, what about those hand-written notes?

The notes were added in January, 1928. They reflect information recorded during a search for an airplane named Aotearoa, and registered as G-AUNZ.

The plane was flown by Lieutenant John Moncrieff and Captain George Hood, who were two New Zealanders who vanished on 10 January 1928 while attempting the first trans-Tasman flight from Australia to New Zealand.

COUNTY CRESTS (for your car?)

Don't forget we have a strictly limited supply of high-quality stick-on decals displaying the County Crests of all of Ireland's 32 counties.

They are designed to go on surfaces like cars - durable, and long-lasting. And just $5 each! All proceeds go to our "RAISE THE ROOF" fundraising campaign. You can only get them at HVIS, so yet another excuse to get along one evening!

The news from Emma & Steve is that Tadhg Joseph Anthony Kelliher arrived safely on 7 April to join the Coffey clan (&, of course HVIS).

With the changes to Levels applying to daily life, we are all responsible for taking simple precautions to keep us all safe.

Please remember to scan the QR Code as you arrive at the Club, or fill-in the Register form if you don’t have a phone able to scan the Code. Use the hand-sanitiser provided, and remember to keep sensible distances between yourself & others at Club functions.

If you’re meeting friends or guests at the Club, they need to sign the Visitors’ Book as well.

Our Financial Year finished at the end of March, so everyone’s subscriptions are again DUE. See Subscription rates.

Make payments by DIRECT CREDIT to account number: 06-0529-0416815-00. Use your family name as the reference (or your phone number if you have to use numbers) and then complete the Renewal Form.

Remember that while the subscription rate is low, this is an essential income-stream for us, and confidence that we will collect it is vital in our planning for the year ahead.

You are invited to commemorate the 40th anniversary of the death of Bobby Sands who died while on hunger strike in the Maze prison, Long Kesh, in 1981.

The first ingredient of any recipe has to be: “find a man who can cook it” (Kay Braid)

This is a very popular dish, especially in Dublin, and has been so for many years. Although it is best made with a good stock - water in which a ham has been boiled, or even a ham bone - a light stock cube will substitute.

Cut the bacon into 1in/ 3cm squares. Bring the stock to the boil in a medium saucepan which has a well-fitting lid, add the sausages and the bacon and simmer for about 5 minutes.

Remove the sausages and bacon and save the liquid. Cut each sausage into four or five pieces. Peel the potatoes and cut into thick slices. Skin the onions and slice them.

Pour the reserved stock over and season lightly to taste. Cover and simmer gently for about an hour. Adjust the seasoning and serve piping hot.

You've found us at:
http://www.huttirish.org.nz

Remember the Hall is available for Hire to members. All this helps your Club financially, so recommend us to your friends.

NB: Regular Newsletters were not produced between December 2015 and January 2020